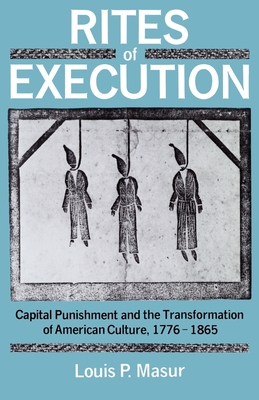 Capital Punishment and the Transformation of America Culture, 1776-1865

Between the seventeenth and nineteenth centuries, Western societies abandoned public executions in favor of private punishments, primarily confinement in penitentiaries and private executions. The transition, guided by a reconceptualization of the causes of crime, the nature of authority, and the purposes of punishment, embodied the triumph of new sensibilities and the reconstitution of cultural values throughout the Western world. This study examines the conflict over capital punishment in the United States and the way it transformed American culture between the Revolution and the Civil War. Relating the gradual shift in rituals of punishment and attitudes toward discipline to the emergence of a middle class culture that valued internal restraints and private punishments, Masur traces the changing configuration of American criminal justice. He examines the design of execution day in the Revolutionary era as a spectacle of civil and religious order, the origins of organized opposition to the death penalty and the invention of the penitentiary, the creation of private executions, reform organizations' commitment to social activism, and the competing visions of humanity and society lodged at the core of the debate over capital punishment. A fascinating and thoughtful look at a topic that remains of burning interest today, Rites of Execution will attract a wide range of scholarly and general readers.