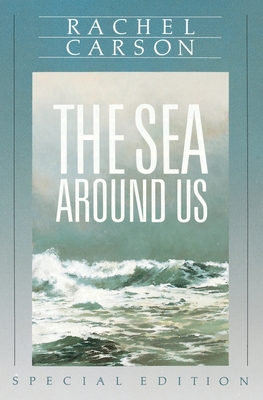 The Sea Around Us (Oxford University Press Paperback)

Published in 1951, The Sea Around Us is one of the most remarkably successful books ever written about the natural world. Rachel Carson's rare ability to combine scientific insight with moving, poetic prose catapulted her book to first place on The New York Times best-seller list, where it enjoyed wide attention for thirty-one consecutive weeks. It remained on the list for more than a year and a half and ultimately sold well over a million copies, has been translated into 28 languages, inspired an Academy Award-winning documentary, and won both the 1952 National Book Award and the John Burroughs Medal. This classic work remains as fresh today as when it first appeared. Carson's writing teems with stunning, memorable images--the newly formed Earth cooling beneath an endlessly overcast sky; the centuries of nonstop rain that created the oceans; giant squids battling sperm whales hundreds of fathoms below the surface; and incredibly powerful tides moving 100 billion tons of water daily in the Bay of Fundy. Quite simply, she captures the mystery and allure of the ocean with a compelling blend of imagination and expertise. Reintroducing a classic work to a whole new generation of readers, this Special Edition features a new chapter written by Jeffrey Levinton, a leading expert in marine ecology, that brings the scientific side of The Sea Around Us completely up to date. Levinton incorporates the most recent thinking on continental drift, coral reefs, the spread of the ocean floor, the deterioration of the oceans, mass extinction of sea life, and many other topics. In addition, acclaimed nature writer Ann Zwinger has contributed a brief foreword. Today, with the oceans endangered by the dumping of medical waste and ecological disasters such as the Exxon oil spill in Alaska, this illuminating volume provides a timely reminder of both the fragility and the importance of the ocean and the life that abounds within it. Anyone who loves the sea, or who is concerned about our natural environment, will want to read this classic work.

The late Rachel Carson was for many years a marine biologist and then editor-in-chief of the United States Fish and Wildlife Service. She was also the author of Silent Spring, Under the Sea Wind, and At the Edge of the Sea. Jeffrey Levinton teaches at the State University f New York at Stony Brook and is the author of Marine Ecology. Ann Zwinger is the author of A Desert Country Near the Sea, Beyond the Aspen Grove, and Run, River, Run.
Loading...
or
Not Currently Available for Direct Purchase