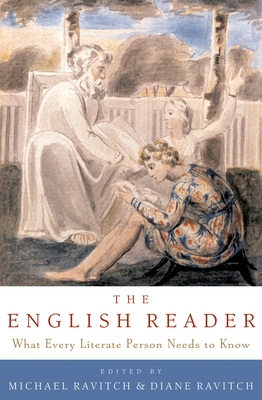 What Every Literate Person Needs to Know

In this sequel to the best-selling The American Reader, mother-and-son team Diane and Michael Ravitch have gathered together the best and most memorable poems, essays, songs, and orations in English history, capturing in one compact volume writings that have shaped not only England, but democratic culture around the globe.
Here are words that changed the world, words that inspired revolutions as well as lovers, dreamers, and singers, words that every educated person once knew--and should know today. Framed by two inspiring speeches--Queen Elizabeth before the invasion of the Spanish Armada and Winston Churchill during the dark days of World War II--the book features work by William Wordsworth and W.H. Auden, Thomas Hobbes and John Stuart Mill, Mary Wollstonecraft and Virginia Woolf, Lewis Carroll and Edward Lear, and many other extraordinary writers. Readers will find ardent love poems such as Marlowe's The Passionate Shepherd To His Love and Shakespeare's Shall I Compare Thee to a Summer's Day? We also find more philosophical works such as Yeat's The Second Coming and Matthew Arnold's Dover Beach. There are excerpts from Isaac Newton and Charles Darwin, Walter Pater and John Ruskin, Edmund Burke and Thomas Carlyle, and other influential thinkers. In addition, the book includes song lyrics ranging from Greensleeves to Rule, Britannia, and works that, though not considered classics, were immensely popular in their day and capture the spirit of an era, such as W.E. Henley's Invictus (I am the master of my fate: / I am the captain of my soul). The editors also provide brief, fascinating biographies of each writer.
An exquisite gift, The English Reader offers the best of the best--the soaring language and seminal ideas that fired the imagination of the English-speaking world.

Diane Ravitch is Research Professor of Education at the Steinhardt School of Education, New York University. One of America's pre-eminent historians of education, her books include Left Back, The Great School Wars, The Troubled Crusade, The Language Police, The American Reader, and The Democracy Reader. She was Assistant Secretary of Education in the first Bush administration and was appointed to a federal testing agency by President Clinton.Michael Ravitch is a freelance critic and writer. His work has appeared in The New Republic, Yale Review, and other publications.
Loading...
or
Not Currently Available for Direct Purchase