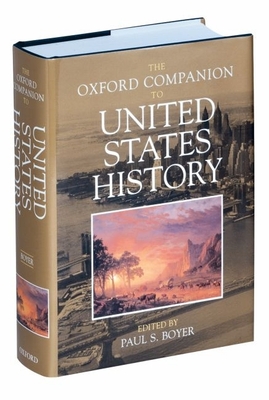 Here is a volume that is as big and as varied as the nation it portrays. With over 1,400 entries written by some 900 historians and other scholars, it illuminates not only America's political, diplomatic, and military history, but also social, cultural, and intellectual trends; science, technology, and medicine; the arts; and religion. Here are the familiar political heroes, from George Washington and Benjamin Franklin, to Abraham Lincoln, Woodrow Wilson, and Franklin D. Roosevelt. But here, too, are scientists, writers, radicals, sports figures, and religious leaders, with incisive portraits of such varied individuals as Thomas Edison and Eli Whitney, Babe Ruth and Muhammed Ali, Black Elk and Crazy Horse, Margaret Fuller, Emma Goldman, and Marian Anderson, even Al Capone and Jesse James. The Companion illuminates events that have shaped the nation (the Great Awakening, Bunker Hill, Wounded Knee, the Vietnam War); major Supreme Court decisions (Marbury v. Madison, Roe v. Wade); landmark legislation (the Fugitive Slave Law, the Pure Food and Drug Act); social movements (Suffrage, Civil Rights); influential books (The Jungle, Uncle Tom's Cabin); ideologies (conservatism, liberalism, Social Darwinism); even natural disasters and iconic sites (the Chicago Fire, the Johnstown Flood, Niagara Falls, the Lincoln Memorial). Here too is the nation's social and cultural history, from Films, Football, and the 4-H Club, to Immigration, Courtship and Dating, Marriage and Divorce, and Death and Dying. Extensive multi-part entries cover such key topics as the Civil War, Indian History and Culture, Slavery, and the Federal Government. A new volume for a new century, The Oxford Companion to United States History covers everything from Jamestown and the Puritans to the Human Genome Project and the Internet--from Columbus to Clinton. Written in clear, graceful prose for researchers, browsers, and general readers alike, this is the volume that addresses the totality of the American experience, its triumphs and heroes as well as its tragedies and darker moments.

Paul S. Boyer is Merle Curti Professor of History and Director of the Institute for Research in the Humanities at the University of Wisconsin--Madison, and the author of Salem Possessed: The Social Origins of Witchcraft.
Loading...
or
Not Currently Available for Direct Purchase