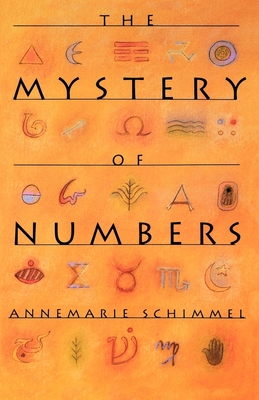 The Mystery of Numbers (Paperback)

Why is the number seven lucky--even holy--in almost every culture? Why do we speak of the four corners of the earth? Why do cats have nine lives (except in Iran, where they have seven)? From literature to folklore to private superstitions, numbers play a conspicuous role in our daily lives. But in this fascinating book, Annemarie Schimmel shows that numbers have been filled with mystery and meaning since the earliest times, and across every society.
In The Mystery of Numbers Annemarie Schimmel conducts an illuminating tour of the mysteries attributed to numbers over the centuries. She begins with an informative and often surprising introduction to the origins of number systems: pre-Roman Europeans, for example, may have had one based on twenty, not ten (as suggested by the English word "score" and the French word for 80, quatrevingt --four times twenty), while the Mayans had a system more sophisticated than our own. Schimmel also reveals how our fascination with numbers has led to a rich cross-fertilization of mathematical knowledge: "Arabic" numerals, for instance, were picked up by Europe from the Arabs, who had earlier adopted them from Indian sources ("Algorithm" and "algebra" are corruptions of the Arabic author and title names of a mathematical text prized in medieval Europe). But the heart of the book is an engrossing guide to the symbolism of numbers. Number symbolism, she shows, has deep roots in Western culture, from the philosophy of the Pythagoreans and Platonists, to the religious mysticism of the Cabala and the Islamic Brethren of Purity, to Kepler's belief that the laws of planetary motion should be mathematically elegant, to the unlucky thirteen. After exploring the sources of number symbolism, Schimmel examines individual numbers ranging from one to ten thousand, discussing the meanings they have had for Judaic, Christian, and Islamic traditions, with examples from Indian, Chinese, and Native American cultures as well. Two, for instance, has widely been seen as a number of contradiction and polarity, a number of discord and antithesis. And six, according to ancient and neo-platonic thinking, is the most perfect number because it is both the sum and the product of its parts (1+2+3=6 and 1x2x3=6). Using examples ranging from the Bible to the Mayans to Shakespeare, she shows how numbers have been considered feminine and masculine, holy and evil, lucky and unlucky.
A highly respected scholar of Islamic culture, Annemarie Schimmel draws on her vast knowledge to paint a rich, cross-cultural portrait of the many meanings of numbers. Engaging and accessible, her account uncovers the roots of a phenomenon we all feel every Friday the thirteenth.

Annemarie Schimmel is Professor of Indo-Muslim Culture at Harvard University. A widely-respected scholar of the Near East, she has written numerous books on Islamic literature, religion, and culture.
or
Buy Here
Copyright © 2020 American Booksellers Association