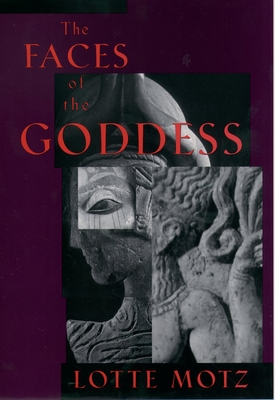 The Faces of the Goddess

The belief that the earliest humans worshipped a sovereign, nurturing, maternal earth goddess is a popular one. It has been taken up as fact by the media, who routinely depict modern goddess-worshippers as "reviving" the ancient religions of our ancestors. Feminist scholars contend that, in the primordial religions, the Great Mother was honored as the primary, creative force, giving birth to the world, granting fertility to both crops and humans, and ruling supreme over her family pantheon. The peaceful, matriarchal farming societies that worshipped her were eventually wiped out or subjugated by nomadic, patriarchal warrior tribes such as the early Hebrews, who brought their male God to overthrow the Great Mother: the first step in the creation and perpetuation of a brutal, male-dominated society and its attendant oppression and degradation of women.
In The Faces of the Goddess, Lotte Motz sets out to test this hypothesis by examining the real female deities of early human cultures. She finds no trace of the Great Mother in their myths or in their worship. From the Eskimos of the arctic wasteland, whose harsh life even today most closely mirrors the earliest hunter gatherers, to the rich cultures of the sunny Fertile Crescent and the islands of Japan, Motz looks at a wide range of goddesses who are called Mother, or who give birth in their myths. She finds that these goddesses have varying origins as ancestor deities, animal protectors, and other divinities, rather than stemming from a common Mother Goddess archetype. For instance, Sedna, the powerful goddess whose chopped-off fingers became the seals and fish that were the Eskimos' chief source of food, had nothing to do with human fertility. Indeed, human motherhood was held in such low esteem that Eskimo women were forced to give birth completely alone, with no human companionship and no helpful deities of childbirth. Likewise, while various Mexican goddesses ruled over healing, women's crafts, motherhood and childbirth, and functioned as tribal protectors or divine ancestors, none of them either embodied the earth itself or granted fertility to the crops: for that the Mexicans looked to the male gods of maize and of rain. Nor were the rituals of these goddesses nurturing or peaceful. The goddess Cihuacoatl, who nurtured the creator god Quetzalcoatl and helped him create humanity, was worshipped with human sacrifices who were pushed into a fire, removed while still alive, and their hearts were cut out. And Motz closely examines the Anatolian goddess Cybele, the "Magna Mater" most often cited as an example of a powerful mother goddess. Hers were the last of the great pagan mysteries of the Mediterranean civilizations to fall before Christianity. But Cybele herself never gives birth, nor does she concern herself with aiding women in childbirth or childrearing. She is not herself a mother, and the male character figuring most prominently in her myths is Attis, her chaste companion. Tellingly, Cybele's priests dedicate themselves to her by castrating themselves, thus mimicking Attis's death--a very odd way to venerate a goddess of fertility.
To depict these earlier goddesses as peaceful and nurturing mothers, as is often done, is to deny them their own complex and sophisticated nature as beings who were often violent and vengeful, delighting in sacrifice, or who reveled in their eroticism and were worshipped as harlots. The idea of a nurturing Mother Goddess is very powerful. In this challenging book, however, Motz shows that She is a product of our own age, not of earlier ones. By discarding this simplistic and worn-out paradigm, we can open the door to a new way of thinking about feminine spirituality and religious experience.

Lotte Motz, PhD, has taught at the City University of New York and the University of Wisconsin. She has written widely on Germanic mythology and literature, and is currently living in the UK.
or support indie stores by buying on