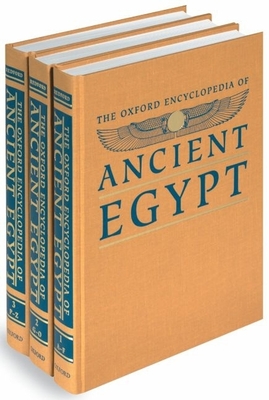 The Oxford Encyclopedia of Ancient Egypt

Featuring 600 original articles written by leading scholars, The Oxford Encyclopedia of Ancient Egypt goes far beyond the records of archaeology to make available what we know about the full social, political, religious, cultural and artistic legacy of this 5,000 year civilization.
The Encyclopedia offers the most complete picture available of ancient Egyptian civilization, from the predynastic era to its eclipse in the seventh century CE. Here is the Egyptian world in illuminating, accessible detail: art, architecture, religion, language, literature, trade, politics, everyday social life and the culture of the court. Of special interest is the coverage of themes and issues that are particularly controversial--such as the new theories of the origins of complex society in the Nile Valley, new discoveries about Greco-Roman Egypt, and new developments in literature, religion, linguistics and other fields, including the debates about Egypt's African legacy.
Extensively illustrated with photographs, line drawings, and maps, the Encyclopedia of Ancient Egypt is designed for the widest possible access, serving students, teachers, and scholars in fields ranging from Near East archaeology and classics to ancient art, architecture, history, language and religion, as well as general readers fascinated by a world that remains--even today--incompletely mapped.