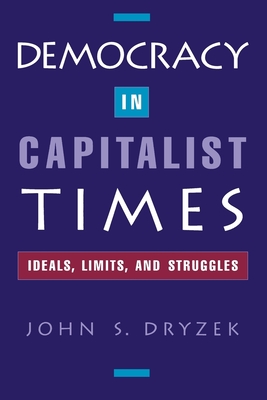 Democracy is under threat from a variety of forces originating in the transnational capitalist economy. Structural economic pressures force states to act in certain ways, regardless of what their populations want or think. In Democracy in Capitalist Times, John S. Dryzek discusses the
challenges transnational capitalism presents for democracy and the most promising places where democracy can find new and growing support. Dryzek links contemporary political theory and comparative politics to explore the contradictions between capitalism and democracy. While ideological forces
limit the range of political debate, government and market together promote aggressive individualism, under which people compete as consumers and profit maximizers rather than associate as citizens. Dryzek outlines these forces, considers how democracy might be defended against them, and explores
the prospects for deepening democracy in the face of these threats. He argues that while state democracy has significantly diminished, democracy in different places, notably civil society, social movements, workplaces, and transnational politics, is on the rise, and it is in these places that
democrats should concentrate their efforts. Dryzek further explains that the health of democratic politics in these alternative locations crucially depends on how states organize patterns of interest representation, among which social democratic corporatism proves to be most conducive to democracy.