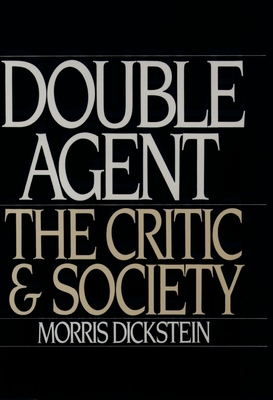 The Critic and Society

Double Agent is a watershed in the recent revival of interest in the role of the public critic and intellectual who writes about culture, politics, and the arts for an intelligent general audience. Offering acute portraits of critics both famous and neglected, Dickstein traces the evolution of
cultural criticism over the last century from Matthew Arnold to New Historicism. He examines the development of practical criticism, the rise and fall of literary journalism, and the growth of American Studies, and rereads the work of critics like Arnold, Walter Pater, I.A. Richards, Roland Barthes,
Edmund Wilson, R.P. Blackmur, Lionel Trilling, Alfred Kazin, and George Orwell. In essays and books that are themselves works of literature, these writers made criticism central to the public sphere, balancing social and literary values, politic commitment and aesthetic judgment. Though
marginalized or ignored by academic histories of criticism, their example has proved immensely valuable for younger critics eager to find a personal voice and reach a wider public. Dickstein concludes with a lively and provocative dialogue that weighs the claims of recent literary theory and the
importance of renewing public culture.

Morris Dickstein is best known for his book on the 1960s, Gates of Eden, which was nominated for a National Book Critics Circle Award and named one of the best books of the year by The New York Times Book Review. His essays and reviews have appeared frequently in journals ranging from the Times BookReview and the Times Literary Supplement to Critical Inquiry and Partisan Review. He teaches English and film at Queens College and at the Graduate Center of the City University of New York, where he coordinates the American Studies program.
Loading...
or support indie stores by buying on