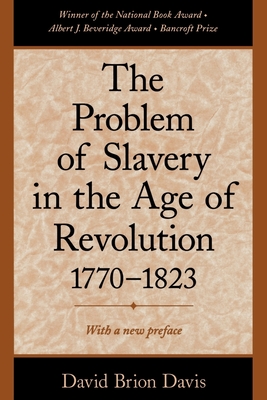 David Brion Davis's books on the history of slavery reflect some of the most distinguished and influential thinking on the subject to appear in the past generation. The Problem of Slavery in the Age of Revolution, the sequel to Davis's Pulitzer Prize-winning The Problem of Slavery in Western Culture and the second volume of a proposed trilogy, is a truly monumental work of historical scholarship that first appeared in 1975 to critical acclaim both academic and literary. This reprint of that important work includes a new preface by the author, in which he situates the book's argument within the historiographic debates of the last two decades.

David Brion Davis is Sterling Professor of History at Yale University. A former President of the Organization of American Historians, he has won the Pulitzer Prize, the National Book Award, the Bancroft Prize, and the American Historical Association's Beveridge Award. His most recent book is The Boisterous Sea of Liberty: A Documentary History of America from Discovery through the Civil War (Oxford University Press, 1998, with Steven Mintz).
Loading...
or support indie stores by buying on