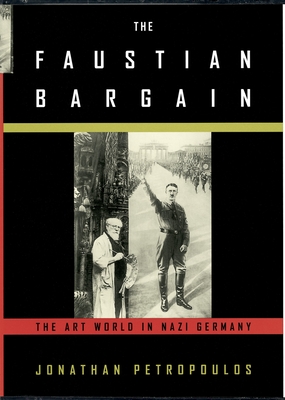 The Art World in Nazi Germany

Nazi art looting has been the subject of enormous international attention in recent years, and the topic of two history bestsellers, Hector Feliciano's The Lost Museum and Lynn Nicholas's The Rape of Europa. But such books leave us wondering: What made thoughtful, educated, artistic men and women decide to put their talents in the service of a brutal and inhuman regime? This question is the starting point for The Faustian Bargain, Jonathan Petropoulos's study of the key figures in the art world of Nazi Germany.
Petropoulos follows the careers of these prominent individuals who like Faust, that German archetype, chose to pursue artistic ends through collaboration with diabolical forces. Readers meet Ernst Buchner, the distinguished museum director and expert on Old Master paintings who "repatriated" the Van Eyck brother's Ghent altarpiece to Germany, and Karl Haberstock, an art dealer who filled German museums with works bought virtually at gunpoint from Jewish collectors. Robert Scholz, the leading art critic in the Third Reich, became an officer in the chief art looting unit in France and Kajetan Muhlmann--a leading art historian--was probably the single most prolific art plunderer in the war (and arguably in history). Finally, there is Arno Breker, a gifted artist who exchanged his modernist style for monumental realism and became Hitler's favorite sculptor. If it is striking that these educated men became part of the Nazi machine, it is more remarkable that most of them rehabilitated
their careers and lived comfortably after the war. Petropoulos has discovered a network of these rehabilitated experts that flourished in the postwar period, and he argues that this is a key to the tens of thousands of looted artworks that are still "missing" today.
Based on previously unreleased information and recently declassified documents, The Faustian Bargain is a gripping read about the art world during this period, and a fascinating examination of the intense relationship between culture and politics in the Third Reich.

As of September 1, 1999, Jonathan Petropoulos will be a Professor of History at Claremont McKenna College in Southern California. Considered one of the preeminent experts on Nazi art plunderers, he is the Research Director for the Presidential Advisory Commission on Holocaust Assets in the United States and the author of Art and Politics in the Third Reich. Presently a resident of Baltimore, he will soon relocate to Pasadena, California.
Loading...
or support indie stores by buying on