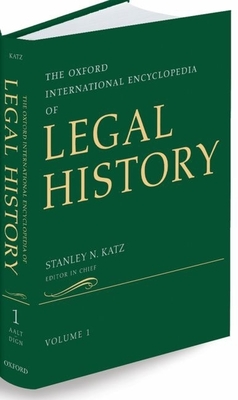 The Oxford International Encyclopedia of Legal History is a comprehensive, international, interdisciplinary reference work that includes approximately 1,000 articles on all aspects of legal history throughout the world from ancient to modern times. Articles deal with private law, public law, and constitutional/higher law throughout the world; each article is signed by one of the set's many noteworthy contributors, which include major scholars and experts.
For years, scholars have been investigating the remote origins of their respective national and religious laws. Only recently has there been a developing interest in and study of the history of law in modern times. The Encyclopedia will bring together the study of ancient law with the study of modern law - examining statutes and administrative rulings as well as judicial decisions, legislatures, agencies, and courts.
The Encyclopedia covers ancient, medieval, early modern, and modern law in eight legal traditions and geographical/cultural areas: Ancient Greek Law, Ancient Roman Law, Chinese Law, English Common Law, Islamic Law, Medieval Roman Law, United States Law, and law in other regions (Africa, Latin America, and South Asia among them). It also addresses major categories of law within these traditions, including private law (contract, tort, civil procedure), varieties of public law (criminal law, administrative law, statutory law), and higher law/ constitutional law. It is the first encyclopedia of law to provide historical and contemporary comparisons of world legal systems.