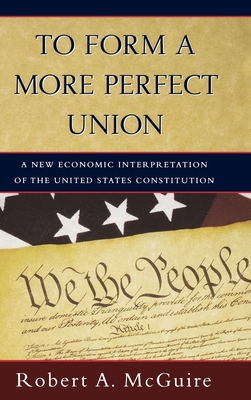 To Form a More Perfect Union

A New Economic Interpretation of the United States Constitution

Many important questions regarding the creation and adoption of the United States Constitution remain unresolved. Did slaveholdings or financial holdings significantly influence our Founding Fathers' stance on particular clauses or rules contained in the Constitution? Was there a division of support for the Constitution related to religious beliefs or ethnicity? Were founders from less commercial areas more likely to oppose the Constitution? To Form a More Perfect Union successfully answers these questions and offers an economic explanation for the behavior of our Founding Fathers during the nation's constitutional founding.
In 1913, American historian Charles A. Beard controversially argued in his book An Economic Interpretation of the Constitution of the United States that the framers and ratifiers of the Constitution were less interested in furthering democratic principles than in advancing specific economic and financial interests. Beard's thesis eventually emerged as the standard historical interpretation and remained so until the 1950s. Since then, many constitutional and historical scholars have questioned an economic interpretation of the Constitution as being too narrow or too calculating, believing the great principles and political philosophies that motivated the Founding Fathers to be worthier subjects of study.
In this meticulously researched reexamination of the drafting and ratification of our nation's Constitution, Robert McGuire argues that Alexander Hamilton, James Madison, George Mason and the other Founding Fathers did act as much for economic motives as for abstract ideals. To Form a More Perfect Union offers compelling evidence showing that the economic, financial, and other interests of the founders can account for the specific design and adoption of our Constitution. This is the first book to provide modern evidence that substantiates many of the overall conclusions found in Charles Beard's An Economic Interpretation while challenging and overturning other of Beard's specific findings. To Form a More Perfect Union presents an entirely new approach to the study of the shaping of the U.S. Constitution. Through the application of economic thinking and rigorous statistical techniques, as well as the processing of vast amounts of data on the economic interests and personal characteristics of the Founding Fathers, McGuire convincingly demonstrates that an economic interpretation of the Constitution is valid. Radically challenging the prevailing views of most historians, political scientists, and legal scholars, To Form a More Perfect Union provides a wealth of new findings about the Founding Fathers' constitutional choices and sheds new light on the motivations behind the design and adoption of the United States Constitution.

Robert A. McGuire was born in Long Beach, California, and educated at Long Beach State and the University of Washington. A professor of economics at the University of Akron, he is the author of many studies that have appeared in academic journals, including the American Economic Review, American Journal of Political Science, Economic History Review, Journal of Economic History, and Public Choice. Among his most recent research is a study of the Confederate constitution appearing in Economic Inquiry and an ongoing study of the role of diseases in American economic history funded with a National Science Foundation grant in 2000.
Loading...
or support indie stores by buying on