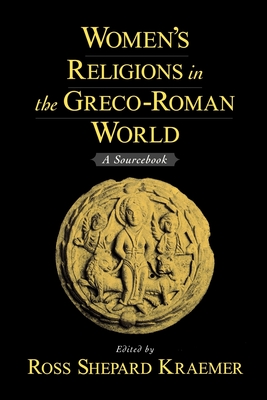 Women's Religions in the Greco-Roman World

This is a substantially expanded and completely revised edition of a book originally published in 1988 as Maenads, Martyrs, Matrons, Monastics. The book is a collection of translations of primary texts relevant to women's religion in Western antiquity, from the fourth century BCE to the fifth century CE. The selections are taken from the plethora of ancient religions, including Judaism and Christianity, and are translated from the six major languages of the Greco-Roman world: Greek, Latin, Aramaic, Hebrew, Syriac, and Coptic. The texts are grouped thematically in six sections: Observances, Rituals, and Festivals; Researching Real Women: Documents to, from and by Women; Religious Office; New Religious Affiliation and Conversion; Holy, Pious, and Exemplary Women; and The Feminine Divine. Women's Religions in the Greco-Roman World provides a unique and invaluable resource for scholars of classical antiquity, early Christianity and Judaism, and women's religion more generally.

Ross Shepard Kraemer is Professor of Religious Studies at Brown University. She is the author of Her Share of the Blessings: Women's Religions Among Pagans, Jews, and Christians in the Greco-Roman World and When Aseneth Met Joseph: A Late Antique Tale of the Biblical Patriarch and His Egyptian Wife, Reconsidered
Loading...
or support indie stores by buying on