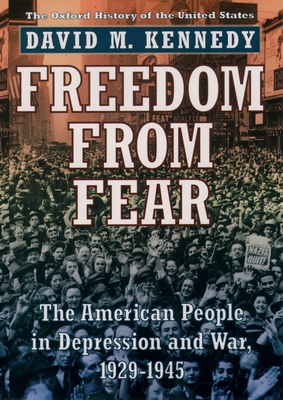 The American People in Depression and War, 1929-1945 (Oxford History of the United States)

Between 1929 and 1945, two great travails were visited upon the American people: the Great Depression and World War II. This book tells the story of how Americans endured, and eventually prevailed, in the face of those unprecedented calamities. The Depression was both a disaster and an opportunity. As David Kennedy vividly demonstrates, the economic crisis of the 1930s was far more than a simple reaction to the alleged excesses of the 1920s. For more than a century before 1929, America's unbridled industrial revolution had gyrated through repeated boom and bust cycles, wastefully consuming capital and inflicting untold misery on city and countryside alike. Freedom From Fear explores how the nation agonized over its role in World War II, how it fought the war, why the United States won, and why the consequences of victory were sometimes sweet, sometimes ironic. In a compelling narrative, Kennedy analyzes the determinants of American strategy, the painful choices faced by commanders and statesmen, and the agonies inflicted on the millions of ordinary Americans who were compelled to swallow their fears and face battle as best they could. Both comprehensive and colorful, this account of the most convulsive period in American history, excepting only the Civil War, reveals a period that formed the crucible in which modern America was formed. The Oxford History of the United States The Atlantic Monthly has praised The Oxford History of the United States as "the most distinguished series in American historical scholarship," a series that "synthesizes a generation's worth of historical inquiry and knowledge into one literally state-of-the-art book. Who touches these books touches a profession."
Conceived under the general editorship of one of the leading American historians of our time, C. Vann Woodward, The Oxford History of the United States blends social, political, economic, cultural, diplomatic, and military history into coherent and vividly written narrative. Previous volumes are Robert Middlekauff's The Glorious Cause: The American Revolution; James M. McPherson's Battle Cry of Freedom: The Civil War Era (which won a Pulitzer Prize and was a New York Times Best Seller); and James T. Patterson's Grand Expectations: The United States 1945-1974 (which won a Bancroft Prize).

David M. Kennedy is Donald J. McLachlan Professor of History at Stanford University. He is the author of Over Here: The First World War and American Society, which was nominated for a Pulitzer Prize, and Birth Control in America: The Career of Margaret Sanger, which won a Bancroft Prize. He lives in Stanford, California.
Loading...
or support indie stores by buying on