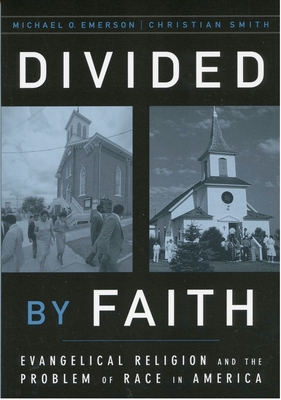 Evangelical Religion and the Problem of Race in America

Through a nationwide telephone survey of 2,000 people and an additional 200 face-to-face interviews, Michael O. Emerson and Christian Smith probed the grassroots of white evangelical America. They found that despite recent efforts by the movement's leaders to address the problem of racial discrimination, evangelicals themselves seem to be preserving America's racial chasm. In fact, most white evangelicals see no systematic discrimination against blacks. But the authors contend that it is not active racism that prevents evangelicals from recognizing ongoing problems in American society. Instead, it is the evangelical movement's emphasis on individualism, free will, and personal relationships that makes invisible the pervasive injustice that perpetuates racial inequality. Most racial problems, the subjects told the authors, can be solved by the repentance and conversion of the sinful individuals at fault.
Combining a substantial body of evidence with sophisticated analysis and interpretation, the authors throw sharp light on the oldest American dilemma. In the end, they conclude that despite the best intentions of evangelical leaders and some positive trends, real racial reconciliation remains far over the horizon.

Michael O. Emerson is the Tsanoff Professor of Public Affairs and Sociology at Rice University, the author of numerous articles on race relations and religion, and the co-author of United by Faith. He lives in Houston, Texas. Christian Smith is the Chapin Distinguished Professor of Sociology at the University of North Carolina, Chapel Hill, and the author of American Evangelicalism and Christian America? What Evangelicals Really Want. He lives in Durham, North Carolina.
Loading...
or support indie stores by buying on