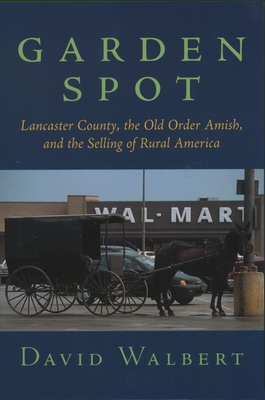 Lancaster County, the Old Order Amish, and the Selling of Rural America

Each year, millions of tourists are drawn to Lancaster County, Pennsylvania, to experience first-hand the quintessential pastoral--both as an escape from urban life and as a rare opportunity to become immersed in history. The area has attracted visitors eager to catch a glimpse of the distinctive religious community of the Old Order Amish, to appreciate the beauty of the farmland, to enjoy the abundant and delicious food of the Pennsylvania Dutch...and, most recently, to shop at the area's outlet malls. For nearly three hundred years, Lancaster county has been a model of agricultural prosperity, rooted in the family farm. The rural character of the place remains Lancaster's predominant tourist attraction, but is at odds with its rapidly rising population and the commercial and residential growth that has brought. It is the tension between rural tradition, progress, and urbanization that lies at the core of Garden Spot. David Walbert examines how twentieth century American culture has come to define and appreciate rurality, and how growth and economic expansion can co-exist with preservation of the traditional ways of life in the region. Will small farms fail in a culture that has increasingly come to value productivity over quality of life? What impact will further development have on maintaining this region's character? Can rurality and progress co-exist in the 21st century? A vivid portrayal of the land and people, residents and outsiders alike, Garden Spot narrates the history of this region and considers the challenges Lancaster County and its people face in order to preserve their unique place.

David Walbert is a writer and historian living in Durham, North Carolina. He was raised in Lancaster County and received his Ph.D. at the University of North Carolina at Chapel Hill.
Loading...
or support indie stores by buying on