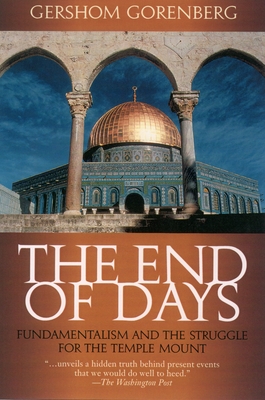 Fundamentalism and the Struggle for the Temple Mount

In this provocative work, seasoned journalist Gershom Gorenberg portrays a deadly mix of religious extremism, violence, and Mideast politics, as expressed in the struggle for the sacred center of Jerusalem. Known to Jews and Christians as the Temple Mount and to Muslims as the Noble Sanctuary, this thirty-five-acre enclosure at the southeast corner of Jerusalem's Old City is the most contested piece of real estate on earth. Here nationalism combines with fundamentalist faith in a volatile brew. Members of the world's three major monotheistic faiths--Judaism, Christianity, and Islam--hold this spot to be the key to salvation as they await the end of the world, and struggle to fulfill conflicting religious prophecies with dangerous political consequences. Adroitly portraying American radio evangelists of the End, radical Palestinian sheikhs, and Israeli ex-terrorists, Gorenberg explains why believers hope for the End, and why prominent American fundamentalists provide hard-line support for Israel while looking forward to the apocalypse. He makes sense of the messianic fervor that has driven some Israeli settlers to oppose peace. And he describes the Islamic apocalyptic visions that cast Israel's actions in Jerusalem as diabolic plots. The End of Days shows how conflict over Jerusalem and the fiery belief in apocalypse continue to have a potent impact on world politics and why a lasting peace in the Middle East continues to prove elusive.

Gershom Gorenberg is an associate editor and columnist for The Jerusalem Report, a regular contributor to The New Republic and an associate of the Center for Millennial Studies at Boston University. He lives in Jerusalem, where he has spent years covering the dangerous mix of religion and politics.
Loading...
or support indie stores by buying on