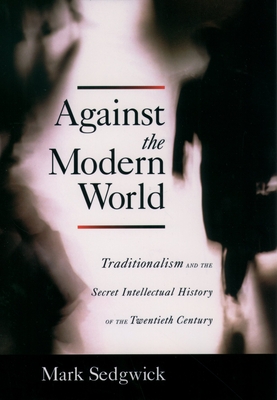 Against the Modern World

Traditionalism and the Secret Intellectual History of the Twentieth Century

The first history of Traditionalism, an important yet surprisingly little-known twentieth-century anti-modern movement. Comprising a number of often secret but sometimes very influential religious groups in the West and in the Islamic world, it affected mainstream and radical politics in Europe and the development of the field of religious studies in the United States.
In the nineteenth century, at a time when progressive intellectuals had lost faith in Christianity's ability to deliver religious and spiritual truth, the West discovered non-Western religious writings. From these beginnings grew Traditionalism, emerging from the occultist milieu of late nineteenth-century France, and fed by the widespread loss of faith in progress that followed the First World War. Working first in Paris and then in Cairo, the French writer Ren� Gu�non rejected modernity as a dark age, and sought to reconstruct the Perennial Philosophy-- the central religious truths behind all the major world religions --largely on the basis of his reading of Hindu religious texts.
A number of disenchanted intellectuals responded to Gu�non's call with attempts to put theory into practice. Some attempted without success to guide Fascism and Nazism along Traditionalist lines; others later participated in political terror in Italy. Traditionalism finally provided the ideological cement for the alliance of anti-democratic forces in post-Soviet Russia, and at the end of the twentieth century began to enter the debate in the Islamic world about the desirable relationship between Islam and modernity

Mark Sedgwick is head of the Islamic Cultures and Societies Research Unit at Aarhus University in Denmark and is the author of Sufism: The Essentials (2000).
Loading...
or support indie stores by buying on