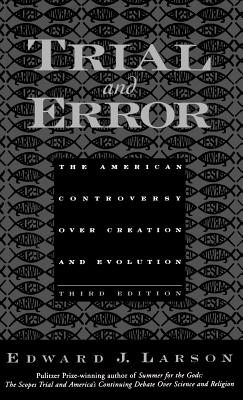 The American Controversy Over Creation and Evolution

Trial and Error traces the coverage or lack thereof, of evolution in textbooks used in American public schools from the mid-1800s to the present. While the teaching of Darwinian evolution was common and not controversial in the late 19th century and into the early 20th century, the debates between evolutionists and creationists, those who argue that the Biblical theory of origins deserves equal treatment, have flared throughout the twentieth century--first in the 1920s, most famously in the Scopes trial; again in the 1960s, when the regional legislation banning the teaching of evolution was overturned, notably in Arkansas and Louisiana; and throughout the 1980s with various controversies over science textbooks, including California. Larson proposes to bring the subject up to the present through a discussion of recent trends, including the "intelligent design" movement, led by Phillip Johnson, a revised form of anti-evolutionism that gained popularity on college campuses; the impact of Michael Behe's versions of evolution; and debates over what counts as evidence for and against evolution--all of which have influenced debates over science standards, particularly at state and local levels. This new chapter will chronicle anti-evolution actions in Kansas and elsewhere and counter-actions by the National Academy of Science and other anti-creationist groups. This updated classic work presents a balanced historical interpretation of legal and educational debates over evolutionism, and will appeal to those interested in the fields of history, religion, science, and law.

Edward J. Larson is the Richard B. Russell Professor of History and Professor of Law, University of Georgia.
Loading...
or support indie stores by buying on