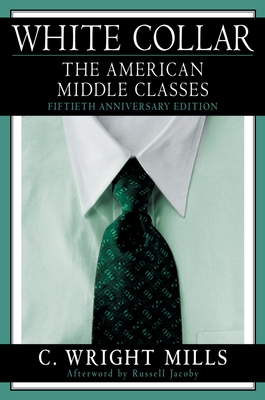 In print for fifty years, White Collar by C. Wright Mills is considered a standard on the subject of the new middle class in twentieth-century America. This landmark volume demonstrates how the conditions and styles of middle class life--originating from elements of both the newer lower and
upper classes--represent modern society as a whole.
By examining white-collar life, Mills aimed to learn something about what was becoming more typically American than the once-famous Western frontier character. He painted a picture instead of a society that had evolved into a business-based milieu, viewing America instead as a great
salesroom, an enormous file, and a new universe of management.
Russell Jacoby, author of The End of Utopia and The Last Intellectuals, contributes a new Afterword to this edition, in which he reflects on the impact White Collar had at its original publication and considers what it means to our society today.
A book that persons of every level of the white collar pyramid should read and ponder. It will alert them to their condition for their better salvation.-Horace M. Kaellen, The New York Times (on the first edition)

The late C. Wright Mills, former Professor of Sociology at Columbia University, was a leading critic of modern American civilization. His other books include The Sociological Imagination and The Power Elite (both OUP). Russell Jacoby is Professor of History at UCLA and a contributing writer to TheNation, The New York Times, and Harper's.
Loading...
or support indie stores by buying on