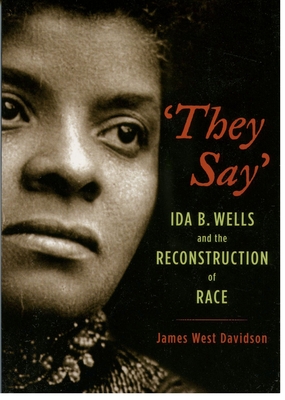 Ida B. Wells and the Reconstruction of Race

In 'They Say, ' James West Davidson recounts the first thirty years in the passionate life of Ida B. Wells--as well as the story of the great struggle over the meaning of race in post-emancipation America. Davidson captures the breathtaking and often chaotic changes that swept the South as Wells grew up in Holly Springs, Mississippi: the spread of education among free blacks, the rise of political activism, and the bitter struggles for equality in the face of entrenched social custom. When Wells came of age she moved to bustling Memphis, where her quest for personal fulfillment was thwarted as whites increasingly used race as a barrier to separate blacks from mainstream America. Davidson traces the crosscurrents of these cultural conflicts through Wells's forceful personality, intertwining her struggle to define herself with her early courageous, and often audacious, behavior. When a conductor threw her off a train for refusing to sit in the segregated car, she sued the railroad--and won. When she protested conditions in segregated Memphis schools, she was fired--and took up journalism. And in 1892, when an explosive lynching rocked Memphis, Wells embarked fully on the career for which she is now remembered, as outspoken anti-lynching writer and lecturer. Period photographs from postcards, newspapers, and Wells's own diary further engage readers in this dynamic story. Richly researched and deftly written, the book offers a gripping portrait of the young Ida B. Wells, who directly encountered and influenced the evolving significance of race in America.

James West Davidson is a historian and writer. He is coauthor of After the Fact: The Art of Historical Detection, Nation of Nations: A History of the American Republic, and Great Heart: The History of a Labrador Adventure.
Loading...
or
Not Currently Available for Direct Purchase