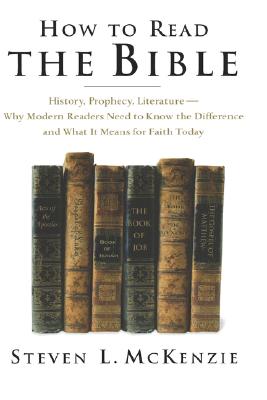 How to Read the Bible (Hardcover)

History, Prophecy, Literature--Why Modern Readers Need to Know the Difference, and What It Means for Faith Today

McKenzie argues that to comprehend the Bible we must grasp the intentions of the biblical authors themselves--what sort of texts they thought they were writing and how they would have been understood by their intended audience. In short, we must recognize the genres to which these texts belong. McKenzie examines several genres that are typically misunderstood, offering careful readings of specific texts to show how the confusion arises, and how knowing the genre produces a correct reading. The book of Jonah, for example, offers many clues that it is meant as a humorous satire, not a straight-faced historical account of a man who was swallowed by a fish. Likewise, McKenzie explains that the very names "Adam" and "Eve" tell us that these are not historical characters, but figures who symbolize human origins ("Adam" means man, "Eve" is related to the word for life ). Similarly, the authors of apocalyptic texts--including the Book of Revelation--were writing allegories of events that were happening in their own time. Not for a moment could they imagine that centuries afterwards, readers would be poring over their works for clues to the date of the Second Coming of Christ, or when and how the world would end. For anyone who takes reading the Bible seriously and who wants to get it right, this book will be both heartening and enlightening.

Steven McKenzie is Professor of Hebrew Bible at Rhodes College, in Memphis, Tennessee. A renowned scholar of the Bible, his previous books include King David: A Biography and To Each Its Own Meaning: An Introduction to Biblical Criticisms and Their Application.
or support indie stores by buying on
Copyright © 2020 American Booksellers Association