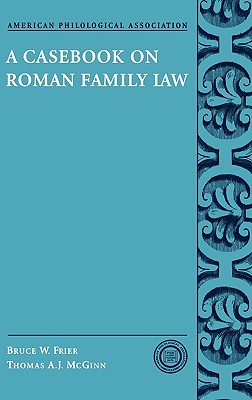 The Roman household (familia) was in many respects dramatically different from the modern family. From the early Roman Empire (30 B.C. to about A.D. 250) there survive many legal sources that describe Roman households, often in the most intimate detail. The subject matter of these ancient sources includes marriage and divorce, the property aspects of marriage, the pattern of authority within households, the transmission of property between generations, and the supervision of Roman orphans. This casebook presents 235 representative texts drawn largely from Roman legal sources, especially Justinian's Digest. These cases and the discussion questions that follow provide a good introduction to the basic legal problems associated with the ordinary families of Roman citizens. The arrangement of materials conveys to students an understanding of the basic rules of Roman family law while also providing them with the means to question these rules and explore the broader legal principles that underlie them. Included cases invite the reader to wrestle with actual Roman legal problems, as well as to think about Roman solutions in relation to modern law. In the process, the reader should gain confidence in handling fundamental forms of legal thinking, which have persisted virtually unchanged from Roman times until the present. This volume also contains a glossary of technical terms, biographies of the jurists, basic bibliographies of useful secondary literature, and a detailed introduction to the scholarly topics associated with Roman family law. A course based on this casebook should be of interest to anyone who wishes to understand better Roman social history, either as part of a larger Classical Civilization curriculum or as a preparation for law school.