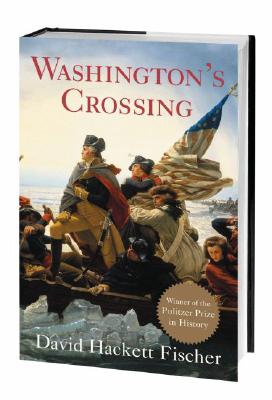 Six months after the Declaration of Independence, the American Revolution was all but lost. A powerful British force had routed the Americans at New York, occupied three colonies, and advanced within sight of Philadelphia. Yet, as David Hackett Fischer recounts in this riveting history, George Washington--and many other Americans--refused to let the Revolution die. On Christmas night, as a howling nor'easter struck the Delaware Valley, he led his men across the river and attacked the exhausted Hessian garrison at
Trenton, killing or capturing nearly a thousand men. A second battle of Trenton followed within days. The Americans held off a counterattack by Lord Cornwallis's best troops, then were almost trapped by the British force. Under cover of night, Washington's men stole behind the enemy and struck them
again, defeating a brigade at Princeton. The British were badly shaken. In twelve weeks of winter fighting, their army suffered severe damage, their hold on New Jersey was broken, and their strategy was ruined. Fischer's richly textured narrative reveals the crucial role of contingency in these events. We see how the campaign unfolded in a sequence of difficult choices by many actors, from generals to civilians, on both sides. While British and German forces remained rigid and hierarchical, Americans
evolved an open and flexible system that was fundamental to their success. The startling success of Washington and his compatriots not only saved the faltering American Revolution, but helped to give it new meaning.

David Hackett Fischer is University Professor at Brandeis University, and the author of such acclaimed volumes as Albion's Seed, The Great Wave, Paul Revere's Ride and Liberty and Freedom.
Loading...
or support indie stores by buying on