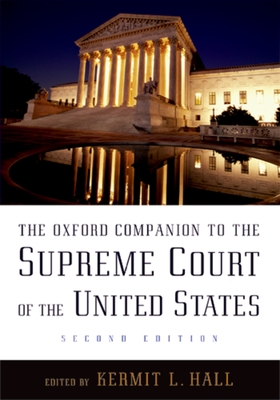 The Oxford Companion to the Supreme Court of the United States

The Supreme Court has continued to write constitutional history over the thirteen years since publication of the highly acclaimed first edition of The Oxford Companion to the Supreme Court. Two new justices have joined the high court, more than 800 cases have been decided, and a good deal of new scholarship has appeared on many of the topics treated in the Companion. Chief Justice William H. Rehnquist presided over the impeachment trial of President Bill Clinton, and the Court as a whole played a decisive and controversial role in the outcome of the 2000 presidential election. Under Rehnquists's leadership, a bare majority of the justices have rewritten significant areas of the law dealing with federalism, sovereign immunity, and the commerce power. This new edition includes new entries on key cases and fully updated treatment of crucial areas of constitutional law, such as abortion, freedom of religion, school desegregation, freedom of speech, voting rights, military tribunals, and the rights of the accused. These developments make the second edition of this accessible and authoritative guide essential for judges, lawyers, academics, journalists, and anyone interested in the impact of the Court's decisions on American society.

Kermit L. Hall is president of the University at Albany, State University of New York, and Professor of History, and the editor of The Oxford Companion to American Law. James W. Ely, Jr. is Milton R. Underwood Professor of Law and History at Vanderbilt University. Joel B. Grossman is Professor of Political Science at Johns Hopkins University.
Loading...
or
Not Currently Available for Direct Purchase