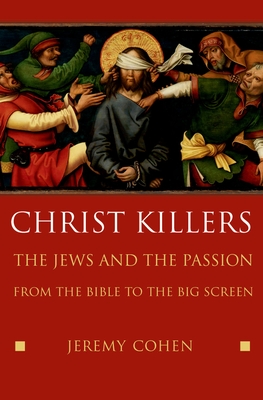 Christians believe that Christ's death redeems and forgives. Yet the same blood shed on the cross has been used to stain Jews with lasting, incomparable guilt. The gospel narratives of the Passion cast the Jews as responsible, directly and indirectly, for the death of the Son of God. The stigma of "Christ killer"-the notion that all Jews, at all times and in all places, share in the collective responsibility for the Crucifixion-has plagued Jews ever since and is the source of much Christian anti-Semitism.
Jeremy Cohen traces the Christ-killer myth from ancient times to the present day, touching on the Gospels and their roots in Hebrew Scripture, Mel Gibson's The Passion of the Christ, and much in between. The greatest of the church fathers, the Crusades, the notorious blood libels of the Middle Ages, the reforms of the Second Vatican Council, Christian mysticism, art, and popular piety, Passion plays, and modern film all have a place in this well-documented, richly illustrated volume.
Cohen seeks neither to explain Jesus' death nor to pass judgment on anyone for it, but rather to understand how the identification of Jews as Christ killers has functioned as an edifying "myth" for the Christian community. His insightful analysis reveals the deep spiritual truth believers find in this aspect of the Passion story while simultaneously uncovering the remarkably far-reaching impact it has exercised on the Western world.
Cohen combines religious, historical, and political perspectives to understand how the Christ-killer myth has become a dominant factor in the way Christians and Jews perceive each other. While a great deal has been written about Christian anti-Semitism, its roots, and its horrific consequences, this is the first volume to provide an in-depth examination of the powerful story that has fueled the fires behind the hatred.

Three-time winner of the National Jewish Book Award, Jeremy Cohen has written extensively on the encounter between Jews and Christians, among his books are The Friars and the Jews: The Evolution of Medieval Anti-Judaism and Living Letters of the Law: Ideas of the Jew in Medieval Christianity. He has taught Jewish history at Cornell University, The Ohio State University, and, most recently, at Tel Aviv University.
or support indie stores by buying on
Copyright © 2020 American Booksellers Association