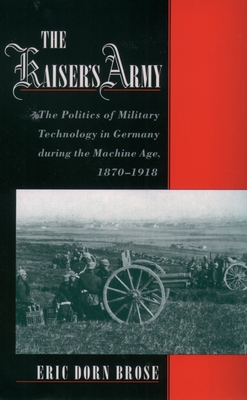 The Politics of Military Technology in Germany During the Machine Age, 1870-1918

This volume covers a fascinating period in the history of the German army, a time in which machine guns, airplanes, and weapons of mass destruction were first developed and used. Eric Brose traces the industrial development of machinery and its application to infantry, cavalry, and artillery tactics. He examines the modernity versus anti-modernity debate that raged after the Franco-Prussian war, arguing that the residue of years of resistance to technological change seriously undermined the German army during World War I.

Eric Dorn Brose is Professor of History and Head of the Department of History and Politics at Drexel University.
Loading...
or support indie stores by buying on