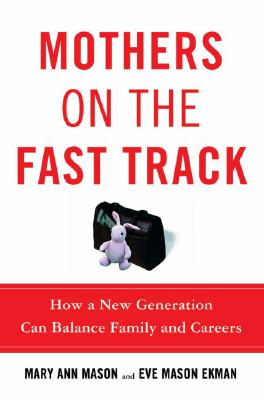 Mothers on the Fast Track

How a New Generation Can Balance Family and Careers

In the past few decades the number of women entering graduate and professional schools has been going up and up, while the number of women reaching the top rung of the corporate and academic worlds has remained relatively stagnant. Why are so many women falling off the fast track?
In this timely book, Mary Ann Mason traces the career paths of the first generation of ambitious women who started careers in academia, law, medicine, business, and the media in large numbers in the 1970s and '80s. Many women who had started families but continued working had ended up veering off the path to upper management at a point she calls the second glass ceiling. Rather than sticking to their original career goals, they allowed themselves to slide into a second tier of management that offers fewer hours, less pay, lower prestige, and limited upward mobility. Men who did likewise--entered the career world with high aspirations and then started families while working--not only did not show the same trend, they reached even higher levels of professional success than men who had no families at all.
Along with her daughter, an aspiring journalist, Mason has written a guide for young women who are facing the tough decision of when--and if--to start a family. It is also a guide for older women seeking a second chance to break through to the next level, as Mason herself did in academia. The book features anecdotes and strategies from the dozens of women they interviewed. Advice ranges from the personal (know when to say no, the importance of time management) to the institutional, with suggestions for how the workplace itself can be changed to make it easier for ambitious working mothers to reach the top levels. The result is a roadmap of new choices for women facing the sobering question of how to balance a successful career with family.

Mary Ann Mason is the first woman to be appointed Graduate Dean at University of California, Berkeley. A former lawyer, she can speak from personal experience about the struggle to balance family responsibilities and a fast-track career. A national expert on child custody issues, Mason is author of From Father's Property to Children's Rights, The Custody Wars, and The Equality Trap. Eve Mason Ekman is a medical social worker in the San Francisco County General Hospital Emergency room and also curates art exhibits locally and nationally. She has a Masters in Social Work from the University of California where she was the editor, founder and art director of an interdisciplinary publication between the schools of Journalism and Social Welfare.
Loading...
or support indie stores by buying on