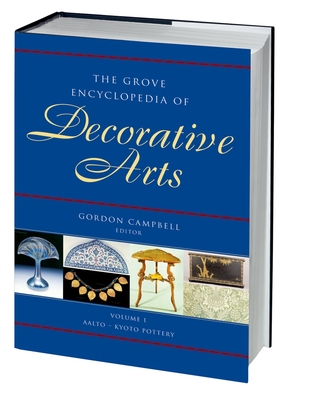 The Grove Encyclopedia of Decorative Arts

The Grove Encyclopedia of Decorative Arts covers thousands of years of decorative arts production throughout western and non-western culture. With over 1,000 entries, as well as hundreds drawn from the 34-volume Dictionary of Art, this topical collection is a valuable resource for those interested in the history, practice, and mechanics of the decorative arts. Accompanied by almost 100 color and more than 500 black and white illustrations, the 1,290 pages of this title include hundreds of entries on artists and craftsmen, the qualities and historic uses of materials, as well as concise definitions on art forms and style. Explore the works of Alvar Aalto, Charles and Ray Eames, and the Wiener Wekstatte, or delve into the history of Navajo blankets and wing chairs in thousands of entries on artists, craftsmen, designers, workshops, and decorative art forms.

Gordon Campbell is Professor of Renaissance Studies at the University of Leicester. As an art historian he has written widely on Renaissance art and architecture (notably in his Oxford Dictionary of the Renaissance). He has published widely on many disciplines, including literature and history as well as art, and has a wealth of editorial experience, much of it for OUP, for which he has edited both journals (including Renaissance Studies) and reference books, of which the most recent is Renaissance Art and Architecture (2004). His scholarly work has been recognized by the award of a D. Litt from University of York and an honorary doctorate from University of Bucharest, by his election as a Fellow of the Royal Historical Society, a Fellow of the Royal Asiatic Society and as a Corresponding Fellow of the South African Society for Medieval and Renaissance Studies.
Loading...
or
Not Currently Available for Direct Purchase