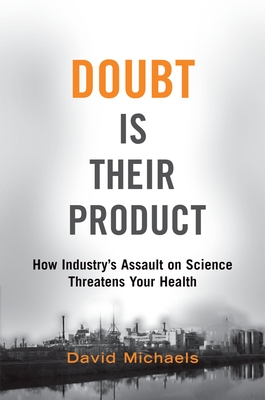 Doubt Is Their Product

How Industry's Assault on Science Threatens Your Health

Doubt is our product, a cigarette executive once observed, since it is the best means of competing with the 'body of fact' that exists in the minds of the general public. It is also the means of establishing a controversy.
In this eye-opening expose, David Michaels reveals how the tobacco industry's duplicitous tactics spawned a multimillion dollar industry that is dismantling public health safeguards. Product defense consultants, he argues, have increasingly skewed the scientific literature, manufactured and
magnified scientific uncertainty, and influenced policy decisions to the advantage of polluters and the manufacturers of dangerous products. To keep the public confused about the hazards posed by global warming, second-hand smoke, asbestos, lead, plastics, and many other toxic materials, industry
executives have hired unscrupulous scientists and lobbyists to dispute scientific evidence about health risks. In doing so, they have not only delayed action on specific hazards, but they have constructed barriers to make it harder for lawmakers, government agencies, and courts to respond to future
threats. The Orwellian strategy of dismissing research conducted by the scientific community as junk science and elevating science conducted by product defense specialists to sound science status also creates confusion about the very nature of scientific inquiry and undermines the public's
confidence in science's ability to address public health and environmental concerns Such reckless practices have long existed, but Michaels argues that the Bush administration deepened the dysfunction by virtually handing over regulatory agencies to the very corporate powers whose products and
behavior they are charged with overseeing.
In Doubt Is Their Product Michaels proves, beyond a doubt, that our regulatory system has been broken. He offers concrete, workable suggestions for how it can be restored by taking the politics out of science and ensuring that concern for public safety, rather than private profits, guides our
regulatory policy.
Named one of the best Sci-Tech books of 2008 by Library Journal

David Michaels is a scientist, former government regulator, and the current appointed head of OSHA. During the Clinton Administration, he served as Assistant Secretary of Energy for Environment, Safety and Health, responsible for protecting the health and safety of the workers, neighboringcommunities, and the environment surrounding the nation's nuclear weapons factories. He currently directs the Project on Scientific Knowledge and Public Policy at The George Washington University School of Public Health and Health Services. In 2006, he received the American Association for theAdvancement of Science's Scientific Freedom and Responsibility Award for his work on behalf of nuclear weapons workers and for advocacy for scientific integrity.
Loading...
or support indie stores by buying on