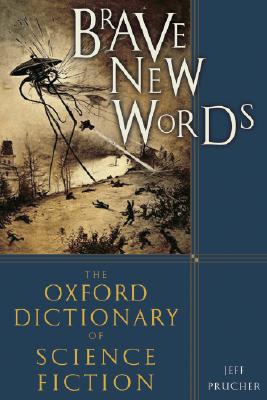 The Oxford Dictionary of Science Fiction

The first historical dictionary devoted to science fiction, Brave New Words: The Oxford Dictionary of Science Fiction shows exactly how science-fictional words and their associated concepts have developed over time, with full citations and bibliographic information. It's a window on a whole genre of literature through the words invented and passed along by the genre's most talented writers. In addition, it shows how many words we consider everyday vocabulary-words like "spacesuit," "blast off," and "robot"-had their roots in imaginative literature, and not in hard science. Citations are included for each definition, starting with the earliest usage that can be found. These citations are drawn not only from science fiction books and magazines, but also from mainstream publications, fanzines, screenplays, newspapers, comics, film, songs, and the Internet. In addition to illustrating the different ways each word has been used, citations also show when and where words have moved out of the science fiction lexicon and into that of other subcultures or mainstream English. Brave New Words covers the shared language of science fiction, as well as the vocabulary of science fiction criticism and its fans--those terms that are used by many authors in multiple settings. Words coined in science fiction have become part of the vocabulary of any number of subcultures and endeavors, from comics, to neo-paganism, to aerospace, to computers, to environmentalism, to zine culture. This is the first book to document this vocabulary transfer. Not just a useful reference and an entertaining browse, this book also documents the enduring legacy of science fiction writers and fans.

Jeff Prucher is a freelance lexicographer and an editor for the Oxford English Dictionary's science fiction project. He has previously been a bookseller, office temp, editorial assistant for Locus, and software quality assurance engineer. He lives in Berkeley with his family.
Loading...
or
Not Currently Available for Direct Purchase