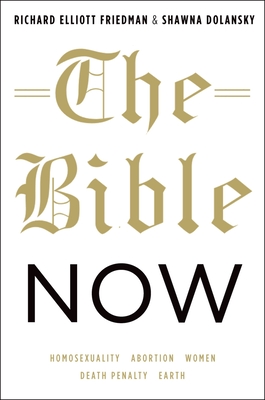 For millennia, people have used the Bible as a touchstone on important social and political questions, and rightly so. But many use the Bible simply as a weapon to wield against opponents in a variety of debates--without knowing what the Bible actually says about the issue in question.
In The Bible Now, two respected biblical scholars, Richard Elliott Friedman and Shawna Dolansky, tell us carefully what the Hebrew Bible says or does not say about a wide range of issues--including homosexuality, abortion, women's status, capital punishment, and the environment. In fascinating passages that shed new light on some of today's most passionate disputes, the authors reveal how the Bible is frequently misunderstood, misquoted, mistranslated, and misused. For instance, those who quote the Bible in condemning homosexuality often cite the story of Sodom, and those who favor homosexuality point to David's lament over the death of Jonathan. But as the authors show, neither passage is clearly about homosexuality, and these texts do not offer solid footing on which to make an argument. Readers learn that female homosexuality is not prohibited--only male homosexuality. And on the subject of abortion, the Bible is practically silent, with one extraordinary exception.
The Bible has inspired people to do great good but has also been used by people to do great harm, so it is vitally important for us to pay attention to it--and to get it right. The Bible Now shows us how we can--and cannot--use this ancient source of wisdom to address our most current and pressing issues.

Richard Elliott Friedman is the Davis Professor of Jewish Studies at the University of Georgia and Katzin Professor of Jewish Civilization Emeritus of the University of California, San Diego. A nationally recognized biblical scholar, Friedman is the author of the bestselling Who Wrote the Bible? aswell as The Disappearance of God, The Hidden Book in the Bible, Commentary on the Torah, The Bible with Sources Revealed, and The Exile and Biblical Narrative.Shawna Dolansky is Assistant Professor of Religious Studies at Northeastern University. She is the author of Now You See It, Now You Don't: The Relationship Between Magic and Religion in the Hebrew Bible and the editor of Sacred History, Sacred Literature.
Loading...
or support indie stores by buying on