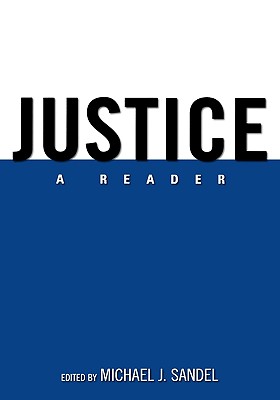 Justice brings together in one indispensable volume essential readings on justice and moral reasoning. With readings from major thinkers from the classical era up to the present, the collection provides a thematic overview of the concept of justice. Moreover, Sandel's organization of the readings and his own commentaries allow readers to engage with a variety of pressing contemporary issues. Looking at a host of ethical dilemmas, including affirmative action, conscription, income distribution, and gay rights, from a variety of angles--morally, legally, politically--the collection engages with the core concerns of political philosophy: individual rights and the claims of community, equality and inequality, morality and law, and ultimately, justice. With concise section introductions that put the readings in context, this anthology is an invaluable tool for students, teachers, and anyone who wishes to engage in the great moral debates that have animated politics from classical times to our own.

Michael J. Sandel is the Anne T. and Robert M. Bass Professor of Government at Harvard University, where he has taught political philosophy since 1980. He is the author of numerous books, including Liberalism and the Limits of Justice, Democracy's Discontent, Public Philosophy and most recently, The Case against Perfection: Ethics in the Age of Genetic Engineering.
Loading...
or
Not Currently Available for Direct Purchase