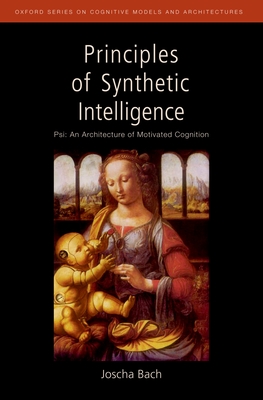 Psi: An Architecture of Motivated Cognition (Oxford Series on Cognitive Models and Architectures #4)

From the Foreword:
"In this book Joscha Bach introduces Dietrich D rner's PSI architecture and Joscha's implementation of the MicroPSI architecture. These architectures and their implementation have several lessons for other architectures and models. Most notably, the PSI architecture includes drives and thus directly addresses questions of emotional behavior. An architecture including drives helps clarify how emotions could arise. It also changes the way that the architecture works on a fundamental level, providing an architecture more suited for behaving autonomously in a simulated world. PSI includes three types of drives, physiological (e.g., hunger), social (i.e., affiliation needs), and cognitive (i.e., reduction of uncertainty and expression of competency). These drives routinely influence goal formation and knowledge selection and application. The resulting architecture generates new kinds of behaviors, including context dependent memories, socially motivated behavior, and internally motivated task switching. This architecture illustrates how emotions and physical drives can be included in an embodied cognitive architecture. The PSI architecture, while including perceptual, motor, learning, and cognitive processing components, also includes several novel knowledge representations: temporal structures, spatial memories, and several new information processing mechanisms and behaviors, including progress through types of knowledge sources when problem solving (the Rasmussen ladder), and knowledge-based hierarchical active vision. These mechanisms and representations suggest ways for making other architectures more realistic, more accurate, and easier to use. The architecture is demonstrated in the Island simulated environment. While it may look like a simple game, it was carefully designed to allow multiple tasks to be pursued and provides ways to satisfy the multiple drives. It would be useful in its own right for developing other architectures interested in multi-tasking, long-term learning, social interaction, embodied architectures, and related aspects of behavior that arise in a complex but tractable real-time environment. The resulting models are not presented as validated cognitive models, but as theoretical explorations in the space of architectures for generating behavior. The sweep of the architecture can thus be larger-it presents a new cognitive architecture attempting to provide a unified theory of cognition. It attempts to cover perhaps the largest number of phenomena to date. This is not a typical cognitive modeling work, but one that I believe that we can learn much from."
--Frank E. Ritter, Series Editor
Although computational models of cognition have become very popular, these models are relatively limited in their coverage of cognition-- they usually only emphasize problem solving and reasoning, or treat perception and motivation as isolated modules. The first architecture to cover cognition more broadly is PSI theory, developed by Dietrich Dorner. By integrating motivation and emotion with perception and reasoning, and including grounded neuro-symbolic representations, PSI contributes significantly to an integrated understanding of the mind. It provides a conceptual framework that highlights the relationships between perception and memory, language and mental representation, reasoning and motivation, emotion and cognition, autonomy and social behavior. It is, however, unfortunate that PSI's origin in psychology, its methodology, and its lack of documentation have limited its impact. The proposed book adapts Psi theory to cognitive science and artificial intelligence, by elucidating both its theoretical and technical frameworks, and clarifying its contribution to how we have come to understand cognition.