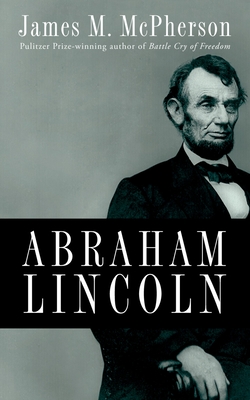 Marking the two-hundredth anniversary of Lincoln's birth, this marvelous short biography by a leading historian offers an illuminating portrait of one of the giants in the American story. It is the best concise introduction to Lincoln in print, a must-have volume for anyone interested in American history or in our greatest president. Best-selling author James M. McPherson follows the son of Thomas Lincoln and Nancy Hanks from his early years in Kentucky, Indiana, and Illinois, to his highly successful law career, his marriage to Mary Todd, and his one term in Congress. We witness his leadership of the Republican anti-slavery movement, his famous debates with Stephen A. Douglas (a long acquaintance and former rival for the hand of Mary Todd), and his emergence as a candidate for president in 1860. Following Lincoln's election to the presidency, McPherson describes his masterful role as Commander in Chief during the Civil War, the writing of the Emancipation Proclamation, and his assassination by John Wilkes Booth. The book also discusses his lasting legacy and why he remains a quintessential American hero two hundred years after his birth, while an annotated bibliography permits easy access to further scholarship. With his ideal short account of Lincoln, McPherson provides a compelling biography of a man of humble origins who preserved our nation during its greatest catastrophe and ended the scourge of slavery.

James M. McPherson is the George Henry Davis '86 Professor of History Emeritus at Princeton University. He has published numerous volumes on the Civil War, including the Pulitzer Prize-winning Battle Cry of Freedom, Crossroads of Freedom (which was a New York Times bestseller), Abraham Lincoln and the Second American Revolution, and For Cause and Comrades: Why Men Fought in the Civil War, which won the Lincoln Prize.
Loading...
or support indie stores by buying on