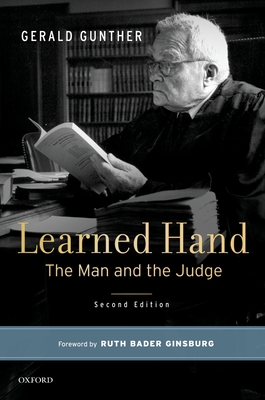 The Man and the Judge

Billings Learned Hand was one of the most influential judges in America. In Learned Hand: The Man and the Judge, Gerald Gunther provides a complete and intimate account of the professional and personal life of Learned Hand. He conveys the substance and range of Hand's judicial and intellectual contributions with eloquence and grace. This second edition features photos of Learned Hand throughout his life and career, and includes a foreword by Ruth Bader Ginsburg. Gunther, a former law clerk for Hand, reviewed much of Hand's published work, opinions, and correspondence. He meticulously describes Hand's cases, and discusses the judge's professional and personal life as interconnected with the political and social circumstances of the times in which he lived. Born in 1872, Hand served on the United States District Court for the Southern District of New York and the United States Court of Appeals for the Second Circuit. He clearly crafted and delivered thousands of decisions in a wide range of cases through extensive, conscientious investigation and analysis, while at the same time exercising wisdom and personal detachment. His opinions are still widely quoted today, and will remain as an everlasting tribute to his life and legacy.

Gerald Gunther (1927-2002) was a professor of constitutional law for almost 50 years, at Stanford University and Columbia University. Before writing Learned Hand: the Man and the Judge he authored Constitutional Law, during his lifetime the most widely used textbook in its field.
Loading...
or
Not Currently Available for Direct Purchase