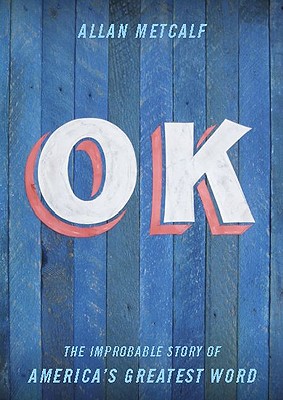 It is said to be the most frequently spoken (or typed) word on the planet, more common than an infant's first word ma or the ever-present beverage Coke. It was even the first word spoken on the moon. It is "OK"--the most ubiquitous and invisible of American expressions, one used countless times every day. Yet few of us know the hidden history of OK--how it was coined, what it stood for, and the amazing extent of its influence. Allan Metcalf, a renowned popular writer on language, here traces the evolution of America's most popular word, writing with brevity and wit, and ranging across American history with colorful portraits of the nooks and crannies in which OK survived and prospered. He describes how OK was born as a lame joke in a newspaper article in 1839--used as a supposedly humorous abbreviation for "oll korrect" (ie, "all correct")--but should have died a quick death, as most clever coinages do. But OK was swept along in a nineteenth-century fad for abbreviations, was appropriated by a presidential campaign (one of the candidates being called "Old Kinderhook"), and finally was picked up by operators of the telegraph. Over the next century and a half, it established a firm toehold in the American lexicon, and eventually became embedded in pop culture, from the "I'm OK, You're OK" of 1970's transactional analysis, to Ned Flanders' absurd "Okeley Dokeley " Indeed, OK became emblematic of a uniquely American attitude, and is one of our most successful global exports. "An appealing and informative history of OK."
--Washington Post Book World "After reading Metcalf's book, it's easy to accept his claim that OK is 'America's greatest word.'"
--Erin McKean, Boston Globe "Entertaininga treat for logophiles."
--Kirkus Reviews "Metcalf makes you acutely aware of how ubiquitous and vital the word has become."
--Jeremy McCarter, Newsweek

Allan Metcalf is Professor of English at MacMurray College and Executive Secretary of the American Dialect Society. He is the author of many other books on language, including most recently Presidential Voices: Speaking Styles from George Washington to George W. Bush (2004). He participates in the "Lingua Franca" blog of the Chronicle of Higher Education.
Loading...
or support indie stores by buying on