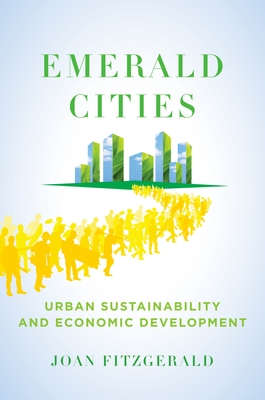 Here is a refreshing look at how American cities are leading the way toward greener, cleaner, and more sustainable forms of economic development. In Emerald Cities, Joan Fitzgerald shows how in the absence of a comprehensive national policy, cities like Chicago, New York, Portland, San Francisco, and Seattle have taken the lead in addressing the interrelated environmental problems of global warming, pollution, energy dependence, and social
justice. Cities are major sources of pollution but because of their population density, reliance on public transportation, and other factors, Fitzgerald argues that they are uniquely suited to promote and benefit from green economic development. For cities facing worsening budget constraints,
investing in high-paying green jobs in renewable energy technology, construction, manufacturing, recycling, and other fields will solve two problems at once, sparking economic growth while at the same time dramatically improving quality of life. Fitzgerald also examines how investing in green
research and technology may help to revitalize older industrial cities and offers examples of cities that don't make the top-ten green lists such as Toledo and Cleveland, Ohio and Syracuse, New York. And for cities wishing to emulate those already engaged in developing greener economic practices,
Fitzgerald shows which strategies will be most effective according to each city's size, economic history, geography, and other unique circumstances. But cities cannot act alone, and Fitzgerald analyzes the role of state and national government policy in helping cities create the next wave of clean
technology growth. Lucid, forward-looking, and guided by a level-headed optimism that clearly distinguishes between genuine progress and exaggerated claims, Emerald Cities points the way toward a sustainable future for the American city.

Joan Fitzgerald is the Director of the Law, Policy and Society Program at Northeastern University and the author of Moving Up in the New Economy: Career Ladders for U.S. Workers and Economic Revitalization: Cases and Strategies for City and Suburb. She lives in Boston.
Loading...
or support indie stores by buying on