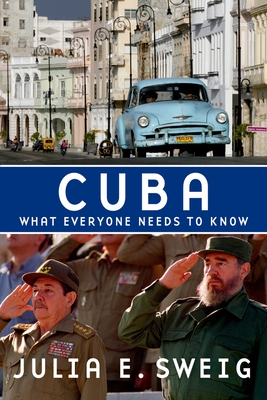 Ever since Fidel Castro assumed power in Cuba in 1959, Americans have been obsessed with the socialist nation ninety miles south of Florida, an obsession fueled in part by successive waves of Cuban immigration and Castro's fiery, larger-than-life persona. Cuban-Americans are today a major ethnic group in Florida, and the exile community is a powerful force in American politics. But what do Americans really know about Cuba?
In Cuba: What Everyone Needs to Know, award-winning author Julia E. Sweig, one of America's leading experts on Cuba and Latin America, presents a concise, authoritative, and remarkably accessible portrait of the small island nation, using an innovative question-and-answer format to illuminate Cuba's unique place on the world stage over the past fifty years. Following a scene-setting introduction that describes the dynamics unleashed since summer 2006 when Fidel Castro transferred provisional power to his brother Raul, the book sets the stage with a concise overview of Cuba's history from its days as a Spanish colony through the first half of the twentieth century before shifting to more recent events: the Cuban missile crisis of 1962, the exploits of Che Guevara in the early years of the revolution, the saga of Elian Gonzalez in 2000, and Castro's failing health and the changes under the presidency of his brother Raul since 2008. Focusing equally on Cuba's role in world affairs and its own social and political transformations, Sweig divides the book chronologically into the pre-Fidel era, the period between the 1959 revolution and the fall of the Soviet Union, the post-Cold War era, and--finally--the looming post-Fidel era.
Compact and expansive, lively andintriguing--like the country itself--Cuba: What Everyone Needs to Know is the best ready reference on Cuba's internal politics, its often fraught relationship with the United States, and its shifting role within the global community.

Julia E. Sweig is the Nelson and David Rockefeller Senior Fellow for Latin America Studies and Director for Latin America Studies at the Council on Foreign Relations. She is the author of Inside the Cuban Revolution (winner of the AHA Herbert Feis award for the best book of the year by an independent scholar) and Friendly Fire: Losing Friends and Making Enemies in the Anti-American Century. She lives with her family outside of Washington, DC.
Loading...
or
Not Currently Available for Direct Purchase