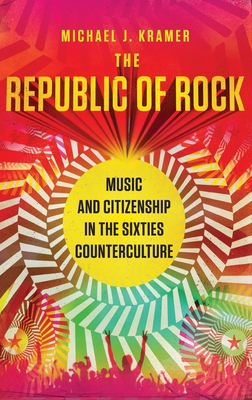 The Republic of Rock

Music and Citizenship in the Sixties Counterculture

In his 1967 megahit "San Francisco," Scott McKenzie sang of "people in motion" coming from all across the country to San Francisco, the white-hot center of rock music and anti-war protests. At the same time, another large group of young Americans was also in motion, less eagerly, heading for the jungles of Vietnam. Now, in The Republic of Rock, Michael Kramer draws on new archival sources and interviews to explore sixties music and politics through the lens of these two generation-changing places--San Francisco and Vietnam. From the Acid Tests of Ken Kesey and the Merry Pranksters to hippie disc jockeys on strike, the military's use of rock music to "boost morale" in Vietnam, and the forgotten tale of a South Vietnamese rock band, The Republic of Rock shows how the musical connections between the City of the Summer of Love and war-torn Southeast Asia were crucial to the making of the sixties counterculture. The book also illustrates how and why the legacy of rock music in the sixties continues to matter to the meaning of citizenship in a global society today. Going beyond clich�d narratives about sixties music, Kramer argues that rock became a way for participants in the counterculture to think about what it meant to be an American citizen, a world citizen, a citizen-consumer, or a citizen-soldier. The music became a resource for grappling with the nature of democracy in larger systems of American power both domestically and globally. For anyone interested in the 1960s, popular music, and American culture and counterculture, The Republic of Rock offers new insight into the many ways rock music has shaped our ideas of individual freedom and collective belonging.

Michael J. Kramer teaches History and American Studies at Northwestern University, and writes about arts and culture at www.culturerover.com.
Loading...
or
Not Currently Available for Direct Purchase