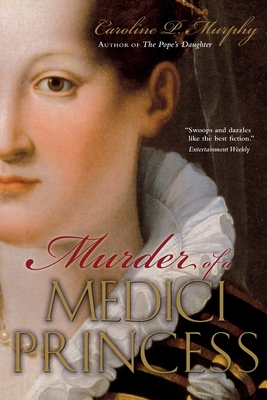 Murder of a Medici Princess (Paperback)

In Murder of a Medici Princess, Caroline Murphy illuminates the brilliant life and tragic death of Isabella de Medici, one of the brightest stars in the dazzling world of Renaissance Italy, the daughter of Duke Cosimo I, ruler of Florence and Tuscany.
Murphy is a superb storyteller, and her fast-paced narrative captures the intrigue, the scandal, the romantic affairs, and the violence that were commonplace in the Florentine court. She brings to life an extraordinary woman, fluent in five languages, a free-spirited patron of the arts, a daredevil, a practical joker, and a passionate lover. Isabella, in fact, conducted numerous affairs, including a ten-year relationship with the cousin of her violent and possessive husband. Her permissive lifestyle, however, came to an end upon the death of her father, who was succeeded by her disapproving older brother Francesco. Considering Isabella's ways to be licentious and a disgrace upon the family, he permitted her increasingly enraged husband to murder her in a remote Medici villa. To tell this dramatic story, Murphy draws on a vast trove of newly discovered and unpublished documents, ranging from Isabella's own letters, to the loose-tongued dispatches of ambassadors to Florence, to contemporary descriptions of the opulent parties and balls, salons and hunts in which Isabella and her associates participated. Murphy resurrects the exciting atmosphere of Renaissance Florence, weaving Isabella's beloved city into her story, evoking the intellectual and artistic community that thrived during her time. Palaces and gardens in the city become places of creativity and intrigue, sites of seduction, and grounds for betrayal.
Here then is a narrative of compelling and epic proportions, magnificent and alluring, decadent and ultimately tragic.

Caroline P. Murphy is a cultural historian and biographer who lives in Cambridge, Mass. She is the author of Lavinia Fontana: A Painter and Her Patrons in Sixteenth-Century Bologna and The Pope's Daughter: The Extraordinary Life of Felice Della Rovere.

Can one transfer the character of Isabella, and her life story to analogies in the modern world? If so, what would her place be in politics, society and culture?

Do we as readers find Isabella a consistently appealing character, or are there moments in which her behavior and mentality seem less so?

The Baroncelli Villa is arguably Isabella’s most important possession. How does her ownership of the villa and her activities there impact her existence?

To what extent is Paolo Giordano Orsini a product of his upbringing? As readers, can we feel any sympathy or pity for him as readers?

How does Isabella compare to the rest of the women in the book (her mother Eleonora, her cousin Leonora, Bianca, Camilla, Giovanna)? What qualities and interests does she share with them, and what makes her different from them?

Isabella has very different and complex relationships with the men in her life—father, brothers, husband, and lover. To what extent do these relationships shape and determine her nature and her life?

As a young husband, Duke Cosimo de’ Medici tell his mother-in-law that all young brides must leave their family home, perhaps never to see their parents again – yet he contrives a situation where his own daughter does not have to. What is Cosimo’s motivation for breaking societal norms and how does this affect the trajectory of Isabella’s life? To what extent does this reflect Cosimo’s own unconventionality as a man, and a ruler, and where else do we see examples of such behavior?

What is the role of the ambassadors from Ferrara, Conegrano and Cortile in Isabella’s story? How would our knowledge be diminished without their letters?

Isabella is extremely proud of belonging to the Medici family. What do you as reader feel that it means to be a Medici? Is she sacrificed for the reputation of the family o her brother’s personal desire for vengeance?

How do you account for the animosity between Catherine de Medici and Cosimo and his family?

Do you feel that Isabella would have made a better ruler of Florence than her brother Francesco, and why?

Sixteenth century Italy became rich material for seventeenth century English playwrights, but they never knew the “true” story of Isabella’s life. How can you imagine her real story told in their hands?

How does Isabella’s life and personality compare to that of other famous women of her age? (eg. Elizabeth I, who almost became her sister-in-law)?

Renaissance Florence is an iconic place in the hearts and imaginations of travelers. What role does the city play in the telling of Isabella’s story?