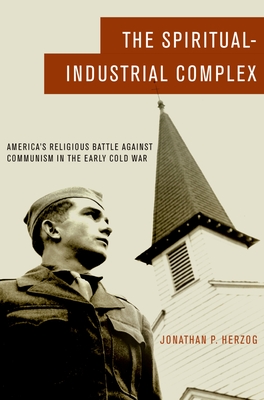 America's Religious Battle Against Communism in the Early Cold War

In his farewell address, Dwight D. Eisenhower warned the nation of the perils of the military-industrial complex. But as Jonathan Herzog shows in this insightful history, Eisenhower had spent his presidency contributing to another, lesser known, Cold War collaboration: the spiritual-industrial complex. This fascinating volume shows that American leaders in the early Cold War years considered the conflict to be profoundly religious; they saw Communism not only as godless but also as a sinister form of religion. Fighting faith with faith, they deliberately used religious beliefs and institutions as part of the plan to defeat the Soviet enemy. Herzog offers an illuminating account of the resultant spiritual-industrial complex, chronicling the rhetoric, the programs, and the policies that became its hallmarks. He shows that well-known actions like the addition of the words "under God" to the Pledge of Allegiance were a small part of a much larger and relatively unexplored program that promoted religion nationwide. Herzog shows how these efforts played out in areas of American life both predictable and unexpected--from pulpits and presidential appeals to national faith drives, military training barracks, public school classrooms, and Hollywood epics. Millions of Americans were bombarded with the message that the religious could not be Communists, just a short step from the all-too-common conclusion that the irreligious could not be true Americans. Though the spiritual-industrial complex declined in the 1960s, its statutes, monuments, and sentiments live on as bulwarks against secularism and as reminders that the nation rests upon the groundwork of religious faith. They continue to serve as valuable allies for those defending the place of religion in American life.

Jonathan P. Herzog is a member of the U.S. Foreign Service. Prior to joining the State Department, he held positions at Stanford University, the Hoover Institution, and the University of Oregon. He holds a Ph.D. in American history from Stanford.
Loading...
or
Not Currently Available for Direct Purchase