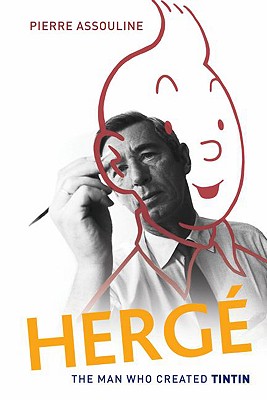 The Man Who Created Tintin

One of the most beloved characters in all of comics, Tintin won an enormous international following. Translated into dozens of languages, Tintin's adventures have sold millions of copies, and Steven Spielberg is presently adapting the stories for the big screen. Yet, despite Tintin's enduring popularity, Americans know almost nothing about his gifted creator, Georges Remi--better known as Herge. Offering a captivating portrait of a man who revolutionized the art of comics, this is the first full biography of Herge available for an English-speaking audience.
Born in Brussels in 1907, Herge began his career as a cub reporter, a profession he gave to his teenaged, world-traveling hero. But whereas Tintin was "fully formed, clear-headed, and positive," Assouline notes, his inventor was "complex, contradictory, inscrutable." For all his huge success--achieved with almost no formal training--Herge would say unassumingly of his art, "I was just happy drawing little guys, that's all." Granted unprecedented access to thousands of the cartoonist's unpublished letters, Assouline gets behind the genial public mask to take full measure of Herge's life and art and the fascinating ways in which the two intertwine. Neither sugarcoating nor sensationalizing his subject, he meticulously probes such controversial issues as Herge's support for Belgian imperialism in the Congo and his alleged collaboration with the Nazis. He also analyzes the underpinnings of Tintin--how the conception of the character as an asexual adventurer reflected Herge's appreciation for the Boy Scouts organization as well as his Catholic mentor's anti-Soviet ideology--and relates the comic strip to Herge's own place within the Belgian middle class.
A profound influence on a generation of artists such as Andy Warhol and Roy Lichtenstein, the elusive figure of Herge comes to life in this illuminating biography--a deeply nuanced account that unveils the man and his career as never before.

Pierre Assouline is a prominent French journalist and writer. He has written several novels as well as acclaimed biographies of photographer Henri Cartier-Bresson and detective novelist Georges Simenon. He is also a film producer and was the 2007 winner of the prestigious Prix de la Langue Francaise.

Charles Ruas is the author of Conversations with American Writers and a frequent contributor to ArtNews and Art in America.