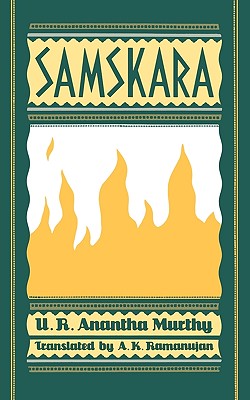 A Rite for a Dead Man (Oxford India Collection)

Made into a powerful, award-winning film in 1970, this important Kannada novel of the sixties has received widespread acclaim from both critics and general readers since its first publication in 1965. As a religious novel about a decaying brahmin colony in the south Indian village of Karnataka, Samskara serves as an allegory rich in realistic detail, a contemporary reworking of ancient Hindu themes and myths, and a serious, poetic study of a religious man living in a community of priests gone to seed. A death which stands as the central event in the plot brings in its wake a plague, many more deaths, live questions with only dead answers, moral chaos, and the rebirth of one man. The volume provides a useful glossary of Hindu myths, customs, Indian names, flora, and other terms. Notes and an afterword enhance the self-contained, faithful, and yet readable translation.

U. R. Anantha Murthy is a well-known Indian novelist.

A. K. Ramanujan is William E. Colvin Professor in the Departments of South Asian Languages and Civilizations and of Linguistics at the University of Chicago. He is the author of many books, including The Striders and several other volumes of verse in English and Kannada.
Loading...
or
Not Currently Available for Direct Purchase