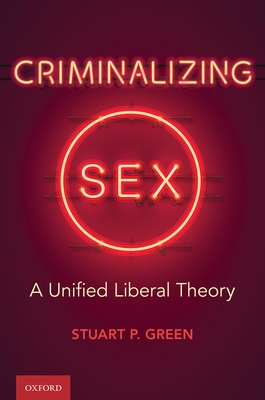 Starting in the latter part of the 20th century, the law of sexual offenses, especially in the West, began to reflect a striking divergence. On the one hand, the law became significantly more punitive in its approach to sexual conduct that is nonconsensual, as evidenced by a major expansion in
the definition of rape and sexual assault, and the creation of new offenses like sex trafficking, child grooming, and revenge porn. On the other hand, it became markedly more permissive in how it dealt with conduct that is consensual, a trend that can be seen, for example, in the legalization or
decriminalization of sodomy, adultery, and adult pornography. This book explores the conceptual and normative implications of this divergence. At the heart of the book is a consideration of a deeply contested question: How should a liberal system of criminal law adequately protect individuals in their right not to be subjected to sexual contact against their will, while also safeguarding their right to engage in (private consensual) sexual
conduct in which they do wish to participate? The book develops a framework for harmonizing these goals in the context of a wide range of nonconsensual, consensual, and aconsensual sexual offenses (hence, the unified nature of the theory) -- including rape and sexual assault in a variety of forms,
sexual harassment, voyeurism, indecent exposure, incest, sadomasochistic assault, prostitution, bestiality, and necrophilia. Intellectually rigorous, fair-minded, and deeply humane, Criminalizing Sex offers a fascinating discussion of a wide range of moral and legal puzzles, arising out of
real-world cases of alleged sexual misconduct - a discussion that is all the more urgent in the age of #MeToo.

Stuart P. Green is a Distinguished Professor of Law at Rutgers University.
Loading...
or support indie stores by buying on