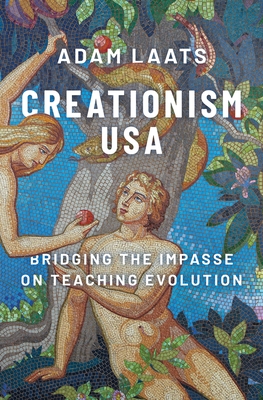 Bridging the Impasse on Teaching Evolution

Who are America's creationists? What do they want? Do they truly believe Jesus rode around on dinosaurs, as sometimes depicted? Creationism USA reveals how common misconceptions about creationism have led Americans into a century of unnecessary culture-war histrionics about evolution education
and creationism. Adam Laats argues that Americans do not have deep, fundamental disagreements about evolution - not about the actual science behind it and not in ways that truly matter to public policy. Laats asserts that Americans do, however, have significant disagreements about creationism. By
describing the history of creationism and its many variations, Laats demonstrates that the real conflict about evolution is not between creationists and evolution. The true landscape of American creationism is far more complicated than headlines suggest. Creationism USA digs beyond those headlines to prove two fundamental facts about American creationism. First, almost all Americans can be classified as creationists of one type or another. Second, nearly all Americans (including self-identified creationists) want their children to learn mainstream
evolutionary science. Taken together, these truths about American creationism point to a large and productive middle ground, a widely shared public vision of the proper relationship between schools, science, and religion. Creationism USA both explains the current state of America's battles over
creationism and offers a nuanced yet straight-forward prescription to solve them.

Adam Laats is a historian interested in culture-war battles over religion and education. He taught middle school and high school for ten years in Milwaukee, Wisconsin. He currently teaches at Binghamton University (State University of New York). His previous books include Fundamentalist U: Keepingthe Faith in American Higher Education, Teaching Evolution in a Creation Nation, The Other School Reformers: Conservative Activism in American Education, and Fundamentalism and Education in the Scopes Era: God, Darwin, and the Roots of America's Culture Wars.
Loading...
or support indie stores by buying on