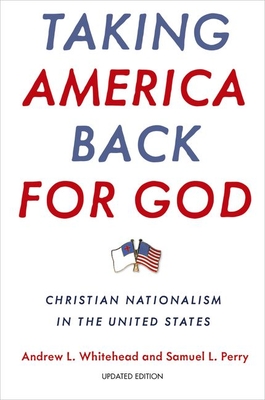 Taking America Back for God

Christian Nationalism in the United States

How did so many white, conservative Christians come to embrace Donald Trump? Why do many argue so vigorously for preserving Confederate monuments and against the teaching of "Critical Race Theory"? Why do many Americans seem so unwilling to acknowledge the injustices that ethnic and racial minorities experience in the United States? Why do a sizeable proportion of Americans continue to oppose women's equality in the workplace and in the home? To answer these questions, Taking America Back for God points to the phenomenon of "Christian nationalism," the belief that the United States is-and should be-a Christian nation. Christian ideals and symbols have long played an important role in American public life, but Christian nationalism is about far more than whether the phrase "under God" belongs in the pledge of allegiance. At its heart, Christian nationalism demands that we must preserve a particular kind of social order, an order in which everyone--Christians and non-Christians, natural-born and immigrants, whites and minorities, men and women recognizes their "proper" place in society. In this award-winning book, the first comprehensive empirical analysis of Christian nationalism in the United States, Taking America Back for God illustrates the influence of Christian nationalism on today's most contentious social and political issues. Drawing on multiple sources of national survey data as well as in-depth interviews, Andrew Whitehead and Samuel Perry document how Christian nationalism shapes what Americans think about who they are as a people, what their future should look like, and how they should get there. Americans' stance toward Christian nationalism provides powerful insight into what they think about immigration, Islam, gun control, police shootings, atheists, gender roles, and many other political issues-very much including who they want in the White House. Taking America Back for God is a guide to one of the most important-and least understood-forces shaping American politics.

Andrew L. Whitehead is Associate Professor of Sociology at IUPUI and co-Director of the Association of Religion Data Archives. He is the author of numerous articles on Christian nationalism and religion in the modern world. Samuel L. Perry is Associate Professor of Sociology at the University of Oklahoma. Along with numerous articles on American religion, politics, race, and sexuality, he has also written several books, including Growing God's Family, Addicted to Lust, and The Flag and The Cross (with Philip Gorski).
Loading...
or support indie stores by buying on