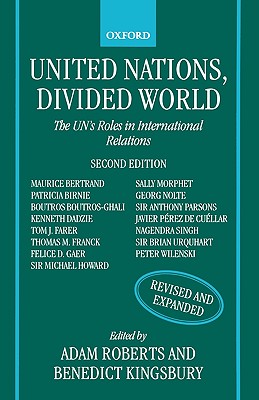 The Un's Roles in International Relations

This extensively revised, updated, and expanded edition takes into account a wide range of events in appraising the role of the United Nations in international relations including: the end of the Cold War, the collapse of the Soviet system in eastern Europe in 1989 and the ensuing demise of the Warsaw Pact, the Gulf War in 1990-1, the end of the Soviet Union in 1991, the comprehensive or partial settlement of several regional conflicts, growing civil strife in several parts of the world, the rapid expansion of U.N. peacekeeping and election-monitoring activities, and the development of U.N. and other international activities for the protection of the environment. It also discusses new debates, writings, and sources. New chapters by Patricia Birnie, Sally Morphet, Brian Urquhart, and Peter Wilenski, as well as Secretary-General Boutros-Ghali's 1992 report An Agenda for Peace, are also included in this newly revised edition.
or support indie stores by buying on
Copyright © 2020 American Booksellers Association