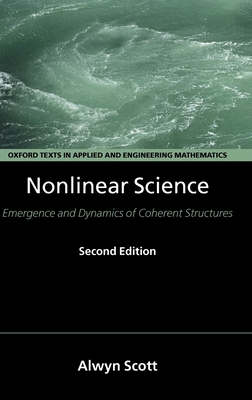 Much mathematical modeling has involved the assumption that physical systems are approximately linear, leading to the construction of equations which although relatively easy to solve, are unrealistic and overlook significant phenomena. Models assuming nonlinear systems however lead to the emergence of new structures that reflect reality much more closely. This second edition of Nonlinear Science places a strong emphasis on applications to realistic problems. It includes numerous new topics such as empirical results in molecular dynamics, solid-state physics, neuroscience, fluid dynamics, and biophysics; numerous new exercises and solutions; updated sections on nerve impulse dynamics, quantum theory of pump-probe measures, and local modes on lattices. With over 350 problems, including hints and solutions, this is an invaluable resource for graduate students and researchers in the applied sciences, mathematics, biology, physics and engineering.

Alywn Scott is an Emeritus Professor at the Department of Mathematics at the University of Arizona and a Consultant at the Department of Informatics and Mathematical Modelling at the Technical University of Denmark. He is the editor of the forthcoming Encyclopedia of Nonlinear Science (Taylor and Francis (Routledge), New York). He is the chairman of in international committee for the Pnevmatikos Prize in Nonlinear Science, which is awarded in even years to outstanding young researchers in nonlinear science. He was a founding director (1981-1985) of the Center for Nonlinear Science in New Mexico.
Loading...
or support indie stores by buying on